“Making motion pictures, the most challenging part of my career actually…”

Ms. Ross started her career as an actress back to 1972 with her role in “Lady Sings The Blues”. The movie tells the story of the jazz and blues legend, Billie Holiday from her youth to her late years. Diana shared the success with Billie Dee Williams, who played the role of Louis McKay. The film was directed by Sidney J. Furie and produced by Brad Dexter, Berry Gordy, Jay Weston and James S. White. The music was arranged by Gil Askey and Michel Legrand. The film earned an estimated $9,050,000 in North American rentals in 1973. “Lady Sings The Blues” was nominated for five Academy Awards. The nominations were for Best Actress in a Leading Role (Diana Ross), Best Art Direction-Set Decoration (Carl Anderson and Reg Allen), Best Costume Design (Norma Koch), Best Music, Original Song Score and Adaptation (Gil Askey & Michel Legrand) and Best Writing, Story and Screenplay Based on Factual Material or Material Not Previously Published or Produced. The film was also screened at the 1973 Cannes Film Festival, but was not entered into the main competition.

Some years later, in 1975, after the success of “Lady Sings The Blues”, Berry Gordy decided to release another film starring by Diana Ross and Billie Dee Williams. The film was called “Mahogany”. In this ocation, Berry Gordy was the director and it was produced by Jack Ballard and Ron Cohen. The film tells the story of a woman by the name of Tracy Chambers that dreams of becoming a fashion designer in Rome. The film was nominated for the best original song Academy Award.

In 1978, “The Wiz” was released. This films was an adaptation of the Broadway musical The Wiz with an all-African-American retelling of the book The Wonderful Wizard of Oz. It was directed by Sidney Lumet and produced by Rob Cohen. The cast includes artits, such as, Michael Jackson, Ted Ross, Richard Pryor, Nipsey Russell, Lena Horne, and of course, Diana Ross. The Wiz was nominated for four Academy Awards: Best Art Direction (Tony Walton, Philip Rosenberg, Edward Stewart, Robert Drumheller), Best Costume Design, Best Original Music Score and Best Cinematography, but did not win any of them. On 1979’s NAACP Image Awards, Michael Jackson received the Outstanding Actor in a Motion Picture Award for The Wiz.

The following films starring by Diana were made-for-television. In 1994, Diana starred in “Out of Darkness”. 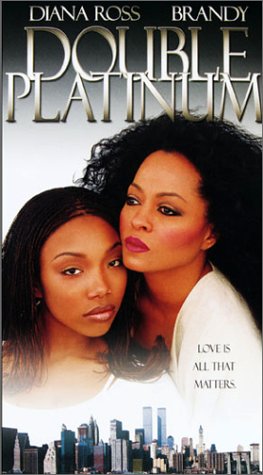 In the film, Ross’s character, named Pauline Cooper, is a former medical student who becomes ill with paranoid schizophrenia and loses 18 years of her life due to the sickness.

After her release from a mental ward, Pauline struggles to rebuild her life with help from doctors, nurses, and a new experimental medication that will help aid her back to health. Ross earned a Golden Globe nomination for Best Actress – Miniseries or Television Film at the 52nd Golden Globe Awards in 1995.

The second movie for television was released in 1999 and it was called “Double Platinum”. It is starred by Diana Ross and Brandy and it tells the story of a woman feeling unfulfilled and unappreciated in her life so she decides to abandon her husband and infant daughter in order to pursue her dreams of superstardom.